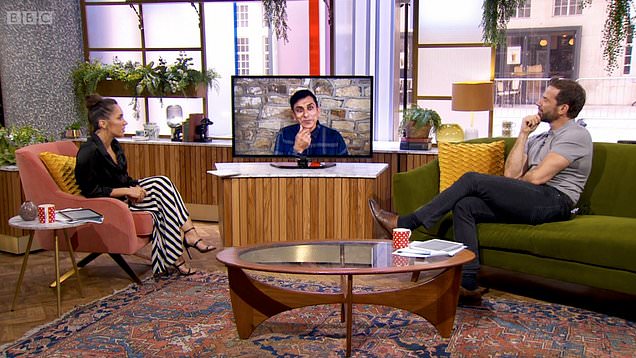 Line of Duty stars have seemingly been banned from talking about the prospect of the crime drama returning for series 7 as speculation remains rife over the future of the BBC crime drama.

Earlier this year, the series six finale of Jed Mercurio’s Line of Duty finally revealed the identity of ‘H’, otherwise known as ‘The Fourth Man’.

Following the unmasking of the bumbling Ian Buckells (Nigel Boyle) as the culprit, many fans questioned whether the conclusion marked the end of Line of Duty completely, or whether it may return for more thrilling cases.

On Thursday July 15, Ace Bhatti, who portrays PCC Rohan Sindwhani in the show, spoke to Janette Manrara and Gethin Jones on BBC’s Morning Live about his upcoming role in series two of Baptiste.

However, of course, the presenters couldn’t help but try to weasel some Line of Duty answers out of him.

When former Strictly Come Dancing professional dancer Janette asked whether he thinks Line of Duty may make a return, Ace placed a hand on his chin, prompting Gethin to cheekily quip: ‘Stop itching your chin because you’re trying to avoid the question.’

Ace said that ‘we’re not allowed to say’ in response to the question, adding: ‘I have no answer, I have no idea.’

He emphasised how closely secrets are kept under wraps on the programme, as ‘no one knew who H was and none of those things.’

Ace, who first starred in Line of Duty in series five, described the response to the drama as ‘fantastic’.

He recalled one time when he was in a bar, when a fan of the series tried to bribe him into revealing H’s identity.

‘The last series I was in, series five, when it was on television I was in a bar and had someone approach me and slip £20 onto the bar and slide it across and say: ‘Are you H?’ I was just having a drink and I went: ‘No, my name is Ace, what’s going on?’ he said.

The actor added: ‘The response has been fantastic and I’m so glad people love that show.’

In June, it was announced that Line of Duty had received the greatest number of nominations for this year’s TV Choice Awards, which are taking place in September.

The crime series received four nods in total, including nominations for Vicky McClure, Adrian Dunbar and Martin Compston in the best actor and best actress categories.


MORE : ‘Not a chance!’ Line of Duty’s Martin Compston flat out refuses to do Steve Arnott’s English accent live on-air

Thanks for reading the whole article. If you wish to get an daily update about Line of Duty stars ‘banned’ from discussing series 7 as rumours swirl , click on the bell button to subscribe for the notifications.